News Today Alert: Salman Sufi, the Prime Minister's Head of Strategic Reforms, has stated that the Censor Board's review committee has approved the release of the film Joyland. Salman Sufi said on the social networking site Twitter that the film Joyland has been approved for release by the review board of the Censorship Board, which was formed under the command of Prime Minister Shahbaz Sharif.

He stated that 'freedom of expression is a basic right that must be exercised within the limits of the law. Earlier, Prime Minister Shahbaz Sharif established a special committee to investigate the complaints registered against the film 'Joyland,' which was banned in Pakistan about a week before its premiere. 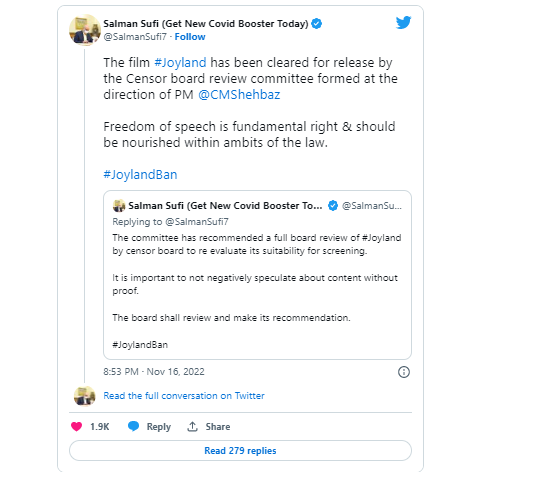 News Today Alert: According to the Prime Minister's office, the committee is made up of the Ministers for Political and Economic Affairs, Information and Broadcasting, Communications, Investment, Information Technology and Telecommunication, Advisor to Prime Minister Gilgit-Baltistan, Chairman PTI, and Chairman Pemra. Concerning the committee, it was said that the committee would investigate the complaints regarding the Joyland film being against social and moral norms and recommend appropriate action.

It should be mentioned that despite being the first Pakistani film to win an award at the Cannes Film Festival and garnering other honors at other international film festivals, including Oscar nominations, the screening of 'Joyland' in Pakistan has been prohibited.

The Central Picture Censor Board withdrew the license for 'Joyland,' stating it violated societal norms and that the film could not be shown in Pakistani theatres. As a consequence of the ban on 'Joyland,' there was a tremendous outcry across the country, and many celebrities raised their voices in support of the release of Joyland.