NewsToday: "It was heartbreaking to recall the floods that devastated Pakistan earlier this year." England captain Ben Stokes said he will donate his money from the next Pakistan test series to flood victims to provide something more than sports.

Earlier today, the first English test team in 17 years arrived in Pakistan for the upcoming test series. Rawalpindi Cricket Stadium will host this test series match. The second and final tests will be held in Multan and Karachi.

On Twitter, Stokes expressed his excitement at the start of this historic series in Pakistan for the first time. The captain stated, "I am donating my match money from this test series to the Pakistan Flood Appeal." 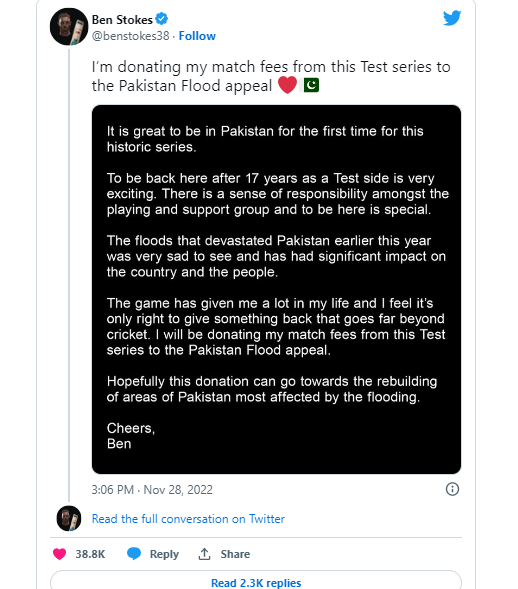 Stokes continued, "The flood has already destroyed Pakistan this year, and it's truly awful to see what has a critical influence on the country and the people." The captain expressed optimism that the present will assist Pakistan in restoring some of its flood-ravaged areas.

Floods in Pakistan have killed one-third of the population, wrecked two million houses and businesses, swept away 7 thousand of kilometers of road, and demolished 500 bridges.