NewsToday: The release of the controversial Pakistani film Joyland throughout the province has been prohibited by the Punjab administration. According to a report, the order issued by the Punjab Department of Information and Culture stated that the government was receiving constant complaints to stop the film's release, so Section 9 of the Motion Pictures Ordinance 1979 (another 2) This film is prohibited under. 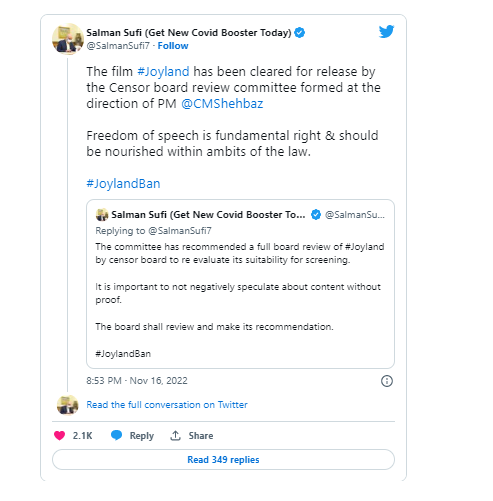 The film was previously cleared by the Censor Boards of Sindh and Punjab, as well as the federal government, and is now ready to be played in theatres (November 18). However, on November 11, the Ministry of Information and Broadcasting barred the film's viewing, but the government was chastised for prohibiting the picture across the country. Thus the federal government proclaimed Joyland clean.

Sana Jafri, the film's co-producer, confirmed that it would be shown in Sindh and the federal capital, but the Punjab government has banned it. The film revolves around the Joyland Rana family who lives in the Gwalandi area of Lahore, the youngest son Haider is unemployed in this family and gets to hear daily taunts about unemployment from his father.

Haider's wife works in a beauty parlor, but the story takes a turn when Haider gets a job as a background dancer behind a transgender 'Biba' in a Punjabi theatre. The film presents Biba, played by trans actress Aleena Khan, as a regular person who was chastised by society.